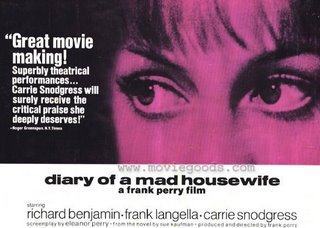 I rented “Diary of a Mad Housewife” from NYC’s Video Room, which has thousands of hard-to-find or out-of-print titles stocked in its warehouse; you call ahead, request the movies, and pick them up in their tiny store on Third Avenue and 80th Street. Even for a movie from 1970, this particular video was in rough shape; the tracking was so off that the picture moved vertically downward–a dizzying effect. After much tracking adjustment, I finally got the picture to stay steady, but there were two white fuzzy lines splitting the image apart (i.e., in a mid-range shot, a character’s face and torso would stay in the center of the screen while her feet would appear at the top of the screen). Fortunately, the sound quality was clear enough to make out the film’s very dated, yet very cutting dialogue.

The movie stars Carrie Snodgress (who was nominated for an Academy Award for Best Actress but ultimately lost to Glenda Jackson, for “Women in Love”) in the title role. New York Times film critic Roger Greenspun, reviewing “Diary” on August 11, 1970, described Snodgress (in the Times’ hilariously bone-dry yet un-P.C. manner at the time) as “skinny, beautiful but not pretty, with a throaty voice and an intelligence that continually saves her from pathos.” (I regard her as sort of a mousier Rosanna Arquette type, with her ear-length bob and toothy grin, though she speaks with that high-toned elocution once demanded of Hollywood actresses).

She may have lost the Oscar because the role, even in the midst of second-wave feminism, is not a triumphant one; this particular housewife, Tina Balser, is verbally abused and ridiculed by her whiny, condescending lawyer husband, Jonathan (Richard Benjamin), and two vicious daughters alike. She is by and large a passive character, quietly stewing, willingly losing most battles. She says nothing in defense when Jonathan scolds her for her “awful hair” and “color,” when he hollers, in his nasal bleat, “Teen-uh? TEEN-AAAAAH!” to request some food while sick in bed. When he tries, gracelessly, to seduce her–usually seconds after berating her–with a forced yokel accent (“How ’bout a rooooll in da hay?”), she rebuffs him quietly so as not to start a fight, rather than telling him to piss off.

From the film’s title, one expects a standard domestic revenge tale a la “Dolores Claiborne” or “She-Devil,” but, as Greenspun noted, “although her world is mad, Tina is quite sane (she is not even, to acknowledge the pun in the title, very openly angry).” And despite the mention of a diary in the title, the audience isn’t allowed inside her head all that much. Wisely, Perry (and his wife, Eleanor, who adapted the screenplay from Sue Kaufman’s novel) allow Tina’s anger to come out sporadically, in fits and starts.  She is not devoid of wit or cunning sarcasm, but this usually falls on deaf ears. “Your outfit shows off your BOSE!” her older daughter sneers, in a dated abbreviation for “bosoms.” “Call those by their proper name,” Tina sighs back, upon which her daughter fumes “Ugh, the names you want us to use…vagina, for God’s sake!” Tina’s bemused reply: “You prefer to use ‘popo’ and ‘down there'”? (The daughter, of course, is non-plussed.)

The pivotal scene of the movie–at once hopelessly dated and ruthlessly sharp in its depiction of 1970s domestic relations–is where Tina and Jonathan attend a bohemian loft party, one where, oddly enough, Alice Cooper is playing to a room full of yuppie lawyers and their clients. Though Jonathan is a control freak, he is not an envious hanger-on; on the contrary, he scoffs at Tina for hanging on him, and encourages her to “circulate.” Ironically, this is how she bumps into the smooth-talking, oily writer George Prager (Frank Langella, who would later play Nixon), with whom she starts a torrid affair. Is Prager her Prince Charming? Does he tell her how beautiful she is, sweep her off her feet with flattery, give her the attention her husband is so incapable of giving?

No. Prager’s first assessment of Tina is that her hair makes her look like an “Aborigine.” Then he tells her to sit on his lap. (In the funniest sequence, Jonathan later applauds Tina for “holding her own” while talking about sex with a male stranger. Again, this would NEVER happen today, which makes it all the more fresh to behold). Once Tina starts her affair with George, in soft-focus, light-nudity love scenes at his apartment on “50th street” (only in the 1970s could a struggling writer afford such a place!),  the talk doesn’t exactly get more respectful. “You’re a terrific piece of ass” and “I thought you’d be good for a couple of screws” and “A lay is a lay is a lay! You come here  and get royally laid!” are about the most tender things George says.

But this is when Tina’s character gets simultaneously more interesting and less sympathetic. Tina isn’t getting any cathartic revenge on Jonathan through this affair–actually, she’s slipping further into self-loathing and masochism–but she does learn to fire back (she calls George a “fag” at one point). And though she could never love George, one gets the sense that his treatment of her, while cruel, is at least cruel in a direct, forthright fashion, not like Jonathan’s fastidious browbeating. He sees her for the weak soul she is and calls her on it, and this ironically brings out her angry, self-righteous side.

Again, we wait for an explosive conclusion. Will Tina change the insanely arrogant George’s womanizing ways? Will his objectification of her as a sex object empower her, so that she can finally, rightfully tell off Jonathan, get a divorce, get away from those awful kids, live independently, without any man? The Perrys and Kaufman have bigger, sadder, juicier fish to fry. The movie ends with two more or less silent close-ups of Snodgress (a wonderful, Oscar-worthy bit of pantomime) in two adjoining scenes: one in which she responds to an unforeseen confession from Jonathan, and another as she is subjected to a barrage of conflicting assessments of her situation, from a therapy group. The credits roll over her completely bewildered face. Despite the film’s flaws–the blocking is stagy at times, there is, sadly, a tremendous paucity of exterior New York shots, and some of the verbal sparring in the dialogue is stilted–this rich, multi-faceted, subtly heartbreaking ending fully redeems it. It’s all the more sad that this film never received a DVD distribution deal, and I intend to find out why (stay tuned!)

I am not above a “Where Are They Now?” section.

Well, Snodgress took a long break from acting during her relationship with Neil Young; three years after their split in 1975, she starred in Brian DePalma’s “The Fury.” Throughout the 1980s and 90s she appeared in several films, among them “Murphy’s Law,” “Pale Rider,” “Homework,” “A Night in Heaven,” “White Man’s Burden,” “Blue Sky” and “Wild Things.” She died in 2004 at the age of 58, from heart failure.

Frank Perry went on to direct two of the most notorious 1980s films: the Joan Crawford biopic/camp classic “Mommie Dearest” and the Christopher Reeve flop “Monsignor” (which will later be discussed on this site). He died of cancer in 1995, at the age of 65.

Richard Benjamin starred in two adaptations of classic Philip Roth novels, “Goodbye, Columbus” and “Portnoy’s Complaint”; the latter film is discussed here. He appeared in several other films throughout the 1970s. He fared better, for awhile, as a director, premiering with the critically acclaimed “My Favorite Year” in 1982; the rest of his resume shows a mixed bag of offerings, from well-received if sentimental films like “Mermaids” to schlockier projects such as “The Money Pit” and “My Stepmother is an Alien.”

According to Wikipedia, “Diary of a Mad Housewife” has never been released on DVD (though it did inspire a Tyler Perry homage, “Diary of a Mad Black Woman”). A no-doubt bootlegged DVD can be purchased here.