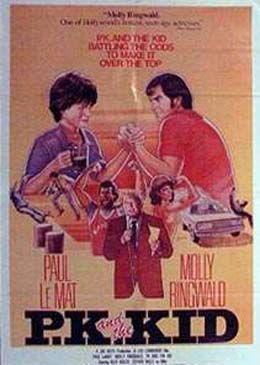 “P.K. and the Kid” first came to my attention sometime during the second grade, circa 1988, when it was shown in somewhat frequent rotation on Cinemax. I was already a huge “Sixteen Candles” fan, and as “P.K.” stars Molly Ringwald, I was curious about it. I watched one scene that was violent and trashy and turned it off, and it pretty much disappeared from my mind for the next 23 years.

Then I found it while perusing through Imdb.com’s alphabetical list of every movie ever made, noted that it was not on Netflix (nor on DVD), and put it on my “Wish List.” Now, 23 years later, my innocence long gone, watching “P.K. and the Kid” would surely be a guilty pleasure. I found out some other things about the movie that made it seem even more like a surefire trash classic. Apparently it was shot in 1982 and then shelved for five years; by 1987, Molly Ringwald (who was 14 when she filmed “P.K.”) had a proven track record of hits (namely John Hughes’ “Sixteen Candles,” “The Breakfast Club” and “Pretty in Pink”). So the producers (including Joe Roth, who would later achieve greater success with “Bachelor Party,” both “Young Guns” movies and “While You Were Sleeping”) figured her teen sweetheart appeal would render “P.K.” a smash success.

The reality is that the production company, Sunn Classic Pictures, a family entertainment outfit, wound up selling “P.K.” to an independent distributor, Castle Hill Productions, which only accomplished a brief theatrical run for the movie. I searched through old news reports and found out that the movie opened in Denver in November 1986 (possibly because the movie was shot partially in Colorado) and then in Houston and a few other mid-sized cities in January 1987. There was very little fanfare; the only article I could find was a Los Angeles Times piece from October 1986, with the headline “Early Molly.” Ringwald herself disowned the film. “I was 14, it was my second project [note: her first was Paul Mazursky’s “Tempest” adaptation], and it’s dated. It’s just not a good picture,” she told the LA Times, and that’s the last thing she’s said publicly about it since; she declined my request for an interview, saying, through her publicist, that she “only talks about current projects.”

Mel Maron, then the marketing-distribution president for Castle Hill, didn’t seem much more enthusiastic about “P.K.’s” delayed release. “It’s not gonna win any awards, hon, but it’s pleasant” was his only comment to the LA Times journalist. (When I called Maron, who launched Florida-based Westchester Films after Castle Hill’s 2006 acquisition by Canada-based Peace Arch Entertainment, he recalled that the film “did alright, it wasn’t a big hit.”)  In the same LA Times article, “P.K.’s” director, Lou Lombardo, previously known as a film editor for Sam Peckinpah and Robert Altman, revealed Ringwald’s salary on the picture ($75,000), surely to Ringwald’s chagrin; the writer threw in that Ringwald’s salary had since escalated to about $1.5 million per picture.

The sole review I could find for “P.K.’s” theatrical release was from the Houston Chronicle. (On the video cassette version I received from my girlfriend, there are no positive blurbs except, oddly, Time Magazine’s praise-laden description of Ringwald herself: “Molly Ringwald. If the name doesn’t set your heart aflutter, it probably means you’re over thirty. The fact is, she’s one of Hollywood’s hottest, most appealing teenage actresses.”) The Houston Chronicle reviewer must have read Ringwald’s mind when he wrote, “Often the pre-big-break films are from the performer’s learning stages and/or I-need-a-job stages. Often the performer might wish to purchase the negatives and all existing prints and cassettes and newspaper ad sheets and posters of the film and set them afire in the middle of the Mojave desert, dancing naked around the flames.”

Castle Hill managed to pull off a slightly more successful video distribution deal with Lorimar. People Weekly’s Ralph Novak reviewed “P.K.” slightly more positively upon its video release in February 1988, though his praise was certainly on the snarky side: “If anyone asks you what has been the greatest arm wrestling movie of the last few years, choose this recently released 1982 film. It has Sly Stallone’s Over the Top beaten, hands down. That’s not to say that it’s a classic for the ages, however.” By comparing “P.K.” to “Over the Top,” Novak may have accidentally uncovered the second reason the film was suddenly released in 1987: since it opened right around the same time as “Over the Top,” it’s not impossible that the producers saw American audiences at that time as suckers for arm wrestling epics. In fact, the original cover art for the movie has the following tagline: “P.K. and the Kid Battling The Odds to Make it OVER THE TOP!”

Well, here’s the sad truth: the story about “P.K. and the Kid’s” journey is far more interesting than “P.K.” itself. As previously mentioned, Sunn Classic Pictures was a family entertainment business, and the plot, at first, seems aptly tame. A teenage girl (Ringwald) runs away from home because of her abusive stepfather (Alex Rocco), whom her mother defends wholeheartedly. Surely, you think, the movie will end with the mother leaving the bad stepfather, and Ringwald will learn that running away isn’t the answer; after all, by the late 1980s, the epidemic of missing teenagers was impossible to ignore, mentioned on every news program and milk carton. But the film is too scatterbrained for that, too desperate to please all audiences. It throws in another cliched movie theme, the root-for-the-underdog sports saga. P.K. doesn’t suffer at all from running away; the first stranger she meets is a kindly pickup truck driver named Kid Kane (Paul Le Mat, of “American Graffiti” fame) who’s on his way to an arm wrestling tournament in Petaluma, California. He becomes a sort of father figure/guardian for Ringwald, and she tags along with him to the tournament.

Given the movie’s low budget, small ambitions and bland, tongue-tied dialogue (“Arm wrestling is the only thing I’m good at. It does something for me. It lifts me up above…everyone around me,” the Kid says at one point), most of “P.K.” plays like a Lifetime movie-of-the-week. And had it stuck to its sweet-tempered central storyline, it might have really reached people. But “P.K.” ultimately fails because of its wild shifts in tone. Rocco’s portrayal of the stepfather is so menacing–especially when he finds P.K., abducts her and locks her in the trunk–that whenever he is on screen he pushes “P.K.” into much darker territory. His altercations with Ringwald are quite violent–in an early scene, she fends off his sexual advances by spraying his eyes with cleanser, and later, she bashes him in the head with a wrench–and therefore not suitable for the “family” audience this movie was seemingly geared towards.

There’s also an ugly subplot involving the Kid’s wrongful arrest for statutory rape, when Rocco catches him gently dancing with P.K. at a bar, and plenty of overtones about P.K.’s budding sexuality and her fixation on the Kid as both a father and a sexual icon. This would be disturbing if it wasn’t staged in such silly, light farcical fashion, ie, P.K. playfully poking the Kid in the ass with a pitchfork. (When I interviewed Paul Le Mat recently, he mentioned that there was an excised scene of Ringwald capriciously jumping into a vat of white wine and swimming around; the producers likely found it too provocative).

The movie’s “suspense” scenes are amateurishly staged, incongruous in tone. When P.K. is fleeing her very dangerous stepfather, she loses him by immersing herself into a parade of mimes; one of the mimes latches on to P.K. and imitates her every move. There are fight scenes in ludicrous settings, such as a cannery that processes “squidburgers.” And the notion of the Kid winning the tournament, given, as Le Mat himself pointed out, the immense size differences between him and his central opponent, Bazooka (Charles Hallohan), is ridiculous. “It was stupid. It looked stupid,” said Le Mat. “They have weight divisions just like in boxing, and this guy was way heavier than me. He was a nice guy, but they casted that wrong. It looks dumb. Audiences aren’t as stupid as some people think they are. If they see something that doesn’t make sense, that’s too fake, they aren’t gonna like it.”

Neither Le Mat nor Maron knew the exact reason why Sunn shelved the movie and then had a hard time distributing it, so I contacted Dr. Lang Elliott, who is the current president of Sunn. The company was acquired by Taft Broadcasting in 1980 for $2.5 million; little to nothing is known about what happened after investors bought Taft out in 1987. According to Sunn‘s web site, the company, now based in Palm Springs, found out that Sunn was “inactive” in the early 2000s; according to news reports, Elliott and other management members “relaunched” Sunn in 2004. It is currently trying to find distributors for films like “Pinocchio in the Hood” and the Tim Conway army comedy “Dorf U.S.M.C.” Elliott politely declined to tell me the details about Sunn’s rebirth; he said that the former president, Raylan Jensen, died recently and could have answered my questions about “P.K.” Lombardo died as well, in 2002, of a stroke; he was 70.

After “P.K.,” Le Mat’s most prominent roles were in “Strange Invaders” (1983) and as an abusive husband in the TV film “The Burning Bed,” with Farrah Fawcett, a role Le Mat now believes he played too convincingly. More recently, he’s been featured mainly in relatively obscure movies such as Arliss Howard’s “Big Bad Love” and the sci-fi flick “Chrome Angels” (AKA “Cyborg Conquest”). He spends his spare time appearing at hot rod shows featuring the actual yellow Coupe his character drove in “American Graffiti”; in 2008, he produced a two-part documentary about these shows called “Hot Rods Across America.” My in-depth interview with him will appear shortly.