While studying in London fall semester junior year, my flatmates and I stumbled upon a BBC2 showing of “The World is Full of Married Men,” a fabulously awful adaptation of the tawdry 1968 novel by Jackie Collins. It had such resonance that, a few weeks later, when we attended a comedy show and the duo on stage offered a free bottle of wine to whomever guessed their favorite film, my friend blurted out “THE WORLD IS FULL OF MARRIED MEN!” The comedians were so impressed with this obscure reference that, even though my friend was incorrect, they gave him the wine. Eleven years later, I found a VHS copy of the film on Amazon (it’s available on DVD in Region 2/European format) and ordered it to see if it lived up to past amusement. It did, indeed. 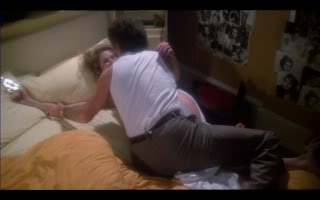 Though it was a British production (directed by Robert Young, who later directed the “Fish Called Wanda” follow-up “Fierce Creatures”), “The World is Full of Married Men” starred American actor Anthony Franciosa (pictured above). Franciosa had starred in several reputable 1950s films such as “A Face in the Crowd,” “A Hatful of Rain” and “The Long, Hot Summer,” but by 1968 his notorious temper had gotten him fired from the TV series “The Name of the Game,” and he was soon thereafter relegated to appearing in B-movies and TV films. American accent aside, he’s perfectly cast here as an aging macho man, whose large, once-commanding frame has been softened by flab and comically hairy armpits. He tries to intimidate his loyal but dull wife (Carroll Baker) into resigned acceptance of his frequent absences. He tries to intimidate his starlet mistress (Sherrie Lee Cronn), whom he adores (he calls her a “little minx” with horny relish in the film’s first of many soft-toned sex scenes) into not straying from him with other married men. Even after he fesses up to his affair and divorces Baker, he tries to intimidate her into wanting him back. He’s insatiable, this grumpy man-child; he needs every woman in his life to be simultaneously the Madonna and the Whore. But none of his tactics work, and the women always have the upper hand.

His mistress constantly laughs at him, mocking his lack of bedroom prowess, boasting of her dalliances with other, even older men (including a renowned elderly director, played with hilarious sleaze by Anthony Steel). The more venomous his jealous taunts (“Aren’t you queen of the bitches!”) the harder she laughs. His blood really starts boiling when his newly single wife starts taking up with a Leif Garrett-esque disco star named Gem Gemini (Paul Nicholas). The disco music is wan and dated, even for 1979, but it’s enlivened by the inclusion of a black backup singer, who intones “I’m gonna kill you!” in deep basso in the middle of Gemini’s song. There’s lots of scenes in strobe-lit discos, and kaleidoscopic special effects are employed for the film’s climactic shooting, which is a scream.

The actors involved seem to know the movie is utter trash, and they have a good time with it. Steel has a nimble feel for hopelessly baroque lines; in one scene, when Franciosa interrupts his tryst with Cronn, he coos something to the effect of, “You have caught me in the middle of a most intense sexual experience.” But best of all is the opening credits (which can be viewed here), in which Bonnie Tyler (years before her hit “Total Eclipse of the Heart”) performs the title track, only to disappear from the film completely.