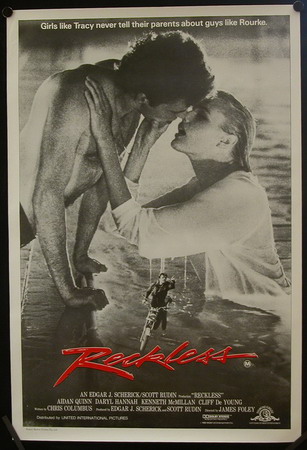 This is not, lamentably, a film whose stupidity you laugh at. You want to call this movie names or throw cans of vegetables at it, just to razz it awake. It mostly sits  there like a dead, vacant, dumb hunk–fittingly, since it’s centered around a dead-eyed, vacant, dumb hunk (Aidan Quinn in James Dean motorbiker mode); even during its few kinetic sequences (most notably a spastic fight in the home-ec classroom), its soul is dead. It’s a movie of very few words, but not in a poetic, visually sophisticated, Terrence Malick-y kind of way. The characters are brooding and self-pitying, allegedly because they are trapped in dead-ended lives, in their dead-ended industrial Midwestern town, but really because they don’t have the energy or drive or intelligence to do anything other than brood. They seem to be brooding because the James Dean movies told them they ought to.

Quinn is presented right away as a loner, an outcast. Strange, because he’s a star on the football team, and has been for years, and he hangs out at the same bowling alleys and fast food joints his classmates inhabit. He’s fuming, though, and we keep waiting for him to deliver some earth-shattering speech as to why he suddenly finds the concept of high school and football and pursuing college so pointless. Yet repeatedly, Quinn just skulks off–from school, from team practice, from arguments with his drunken father–with only a smattering of words (which basically add up to “Whatever.”) His drunk dad–Mom deserted them years ago–browbeats him, but the two seem to love each other deep down, and in their two or three confrontations, it seems a simple, quiet talk would settle some matters. But again Quinn just stomps off, or throws petty tantrums. There’s scant explanation for this behavior; the petulance is Foley’s trump card, an end in itself.

Nothing, in fact, is explained. Why does Daryl Hannah, the richest, prettiest girl in school, first take notice of Quinn one random night at the bowling alley? Doesn’t he play on the same football team as her boyfriend (Adam Baldwin, who later played the unhinged, gun-crazy marine Animal Mother in “Full Metal Jacket”)? Hasn’t he been a fierce presence at her school and her hang-out spots for years? Furthermore, why is Baldwin (an oddball actor who never keeps a straight face, who always seems slyly above the material) cast as the all-American jock? The roles should have been reversed. (“You used to be normal,” Baldwin says condescendingly to Quinn in the locker room, and you want to respond: “He is normal. Too normal. You’re not normal. You are Adam Baldwin. This movie is so, so stupid!”)

The questions continue. If Quinn is so damn rebellious, so much more creative than his dull, by-the-book classmates, why is his sole activity circling on his motorbike around a beer bottle, perched on the edge of a cliff? Why does Foley show us this ritual again and again? Why is Hannah impressed by it? (Why is Foley?) What’s so intriguing about a guy whose most trenchant sentence is “I gotta get out of this place, go somewhere, and I gotta go now”?

To be fair, Foley, who later directed some of Madonna’s finest videos, attempts to answer some of these questions through splashy music montages. When Quinn first lusts after Hannah at the school dance, she tells him to bug off. Two seconds later, the hard rock score cranks up and he’s twirling her around the dance floor like a maniac. That’s all it takes; in the next scene, Hannah dumps Baldwin for Quinn.

On their first date, they break into the school, trash a classroom, snoop through school records. She wants to go home; she’s still an obedient little girl deep down, whose mom entrusts her with the family credit card (in an earlier scene–the only scene that even hints at tension–Hannah blurts out to her mother that she hates her life being “so perfect,” but when her mom expresses genuine concern, she dismisses her rant as “just a joke, everything’s cool” and runs out. So much for tension). He turns on Kim Wilde’s “Kids in America” (a decidedly unrebellious, unerotic song), and again, bad ’80s music unleashes the feral beast within her. They hit each other with foam pillows lying around the gym, for some reason, then disrobe by the pool. They get into the pool. Again she gets scared and runs off–for the boiler room (!!), which is where the inevitable sex scene happens. Needless to say, it has no heat, and Foley cuts the subsequent ones abruptly short. Even the flashy scenes fizzle here.

This wouldn’t be all that upsetting if it weren’t for the talent involved. Foley engineered better–vastly better–fare later on with “At Close Range” and “Glengarry Glen Ross,” and even while getting his feet wet in Hollywood back in 1983–when the film was shot–he surely had the expertise to put together a flashily entertaining piece of trash. Young actors were clamoring for juicy dramatic roles; teen movies were churned out assembly-line style, and audiences back then didn’t care that the actors playing the teens were in their mid-20s. So it’s a little bit infuriating to watch up-and-comers such as Jennifer Grey (later the star of “Dirty Dancing”) and Haviland Morris (the bitchy cheerleader whom Michael Schoeffling dumps for Molly Ringwald in “Sixteen Candles”) cast in roles with zero punch, presence or personality. About the best that can be said for Morris and Grey is that they look good in their schoolgirl outfits as they spend their scenes snickering and blushing in the background. When they speak, they quietly comment on–or at best make a few lame cracks about–the film’s eerily blasé proceedings.

And debuting screenwriter Chris Columbus (who later directed “Home Alone”) shows none of his knack for capturing the spirit and sassiness and adventurousness of youth that he displayed so well in such later screenplays as “The Goonies.”

OK, fine, I’ll resort to a few adverbs. “Reckless” is stunningly, joylessly, stupidly bad. You want to beat it to death, except it’s already dead.