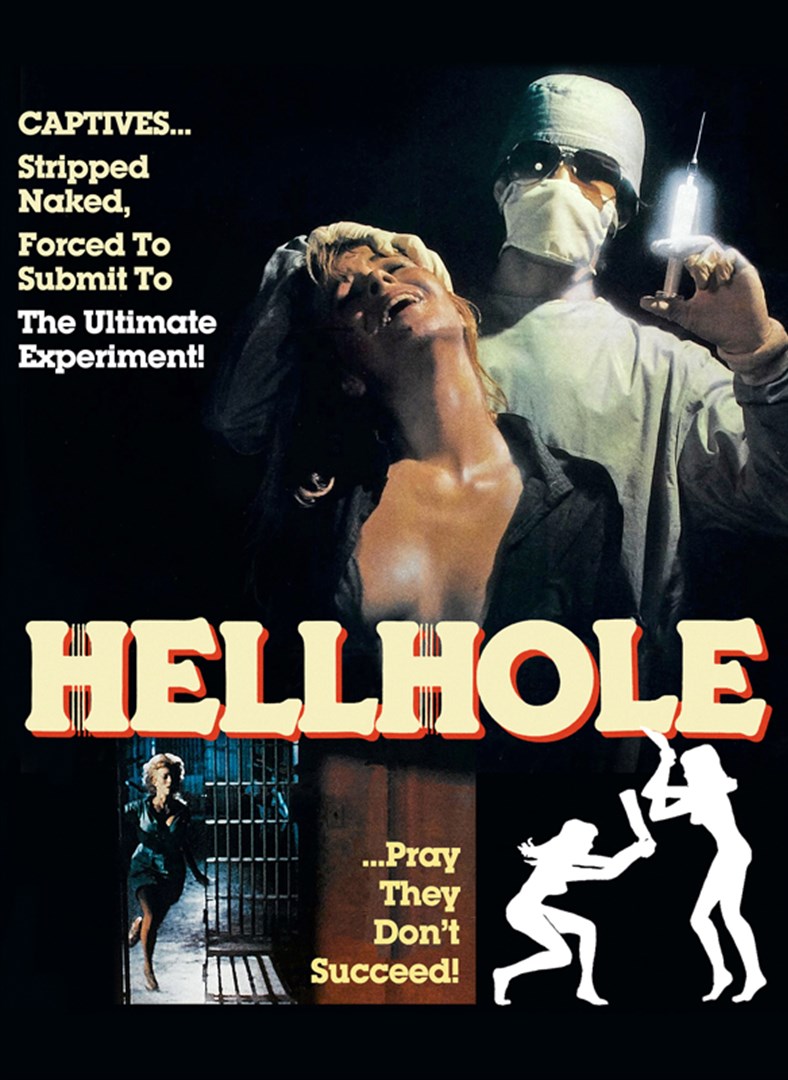 Hidden Films is breaking a golden rule: “reviewing” a film before we’re even done watching it!

And since we reviewers follow (as best we can) the law of “no spoiler alerts” to the fullest extent, you B-movie and trash movie and smut movie and torture movie aficionados who have seen “Hellhole” all the way through: kindly extend us at Hidden Films the same courtesy! (With any luck, I’ll know the ending by tonight!!)

“Hellhole” slipped onto my radar quite some time ago, when I was interviewing Mary Woronov for a Paul Morrissey retrospective. She said something cheeky about it, we both moved on.

A few days ago, again for a totally separate purpose, I talked to the actor Curtis Taylor who plays a prison guard in “Hellhole.” I have yet to hear his thoughts on it.

I learned a few other things about it. It was a movie loaded with “lasts.” As in, it was the last of five films produced by Arkoff International Pictures, helmed by the late Samuel Arkoff (whose middle letter is “Z,” the last letter of the alphabet, and the lowest possible grade for schlock films). Arkoff got his feet wet (pun most certainly intended) with the Frankie Avalon/Annette Funicello beach movies of the 1960s.

It was also the last of six films produced by the late Billy Fine, he of “Chained Heat” and “Penitentiary II” fame. An actress I interviewed the other day who was in the former film said his motto, regarding scripts, was: “I don’t smell ’em, I just sell ’em.”

It was the last of three films directed by Pierre De Moro. His other two are family films, about as far from the world of “Hellhole” as you can get. In the last public mention I could find of him–in a December 1989 Los Angeles Times piece–he was excoriated for his “plodding, insensitive direction” of a Francoise Sagan play called “A Chateau in Sweden,” earlier a Roger Vadim film called “Nutty, Naughty Chateau.”

Two of “Hellhole’s” three screenwriters perpetrated other offenses on the public post-1985; I have yet to see if they are as thrilling as “Hellhole.”

“But enough yapping,” you’re probably thinking to yourself. “I didn’t come here to read a bunch of filmmakers and actors’ bios. I came here to learn about Hellllllllhoooooooollllle!

But we’ll get to that in a little bit.

Right now, there is no such peril. She is having a conversation with her mother. She’s worried they’re in trouble because her mother has stolen some secret, scandalous papers from her employer. Her mother tells her, “Don’t worry about it, honey. Everything is OK. Go take your shower.”

But everything is not OK. This is not a movie called “Heavenhole,” after all.

A male intruder named Silk (Ray Sharkey, sporting a half Jew ‘fro, half pompadour) breaks in and starts hassling the mother, who calls her daughter for help. But her daughter is in the shower. Her shower is only glimpsed in silhouette, from far, far away. For about a millisecond, we believe this is that rare Z-film in which the filmmakers will show some restraint.

Of course they don’t! This isn’t called “Restrainthole,” after all!

Even post-shower, the mother’s cries are continuously drowned out by a hair dryer, a television set and loud aerobics music. In a moment altogether too chilling for a wilful piece of trash such as this, the daughter gets down the stairs just in the nick of time to see Silk strangling her mother to death. She furrows her brow.

Running from Silk, she ends up–where else–at the top of a neighboring construction project. Silk corners her and oozes forward as she edges closer and closer to the drop. She falls gloriously onto a pile of wooden planks, from around 15 stories up. But, this being Hollywood, she wakes up with scarcely a scratch on her, and made up to the nines, in a revealing mental hospital gown. All the patients–but naturally, not all of the staff–are female, buxom, and either stark raving mad or nympho-maniacal, or both. Our heroine is suffering from amnesia, and has conveniently forgotten the incident, Silk, her mother and herself.

Silk’s employers, still worried the dead mother’s stolen papers are gonna leak, force him to take a job as an orderly at the hospital. He’s instructed to keep an eye on our girl–in case her amnesia slips and she starts yapping–but also not hurt her. His first night on the job, however, he breaks into her ward and violently torments her. Silk, it seems, is good at assailing but not much else, particularly not disguises/playacting.

But enough about all this! You wanna hear about the helllll hoooooooooole!

The hell hole, we are informed by an ominous-sounding patient with a West Indies accent–who is of course there to warn the pretty white protagonist and then disappear entirely–is an unspeakably terrible place in the basement of an already pretty terrible boiler room. The meanest staff members take disobedient patients there and experiment on them. The head doctor (Mary Woronov) injects these victims with some sort of formaldehyde, meant to lobotomize them but sometimes killing them. “Oh, don’t die, please don’t die,” she coos heartlessly at one such unfortunate soul. Not because she cares about the victim, you see, but because a successful lobotomy is better for her “research” than an accidental death.

I’m only 45 minutes in, but so far the lingering theme of the film is villains ludicrously (even by Hollywood standards) getting away with dastardly deeds. Silk is caught twice tormenting the protagonist yet is inexplicably allowed to keep his job as an orderly. Woronov is inspected by a rigid watchdog, who insists on searching the boiler room, but somehow the watchdog’s lazy assistants compel her to leave the premises–just before she has checked the Hellhole. “Bitch,” Woronov coos at the watchdog once she is safely out of sight. “I knew I’d win.”

This is where I stopped.

Oh yeah, did I mention the generous supply of nudity? Really, now. Billy Fine and Samuel Arkoff and Pierre De Moro: I know you promised us entertainment, but…awww, you shouldn’t have!! You’re spoiling us!!

(The following questions are hypothetical; do NOT answer them if you know the answers; like I said, I don’t want anything spoiled!!):

What will ensue for our heroine, the crazy doctor, Silk and his employers in the remaining 40 minutes?! Will our girl be lobotomized, thereby rendering her acting even more zombie-like than it is currently?? Will she remember, and then avenge, her mother’s untimely death? Will Silk meet his not untimely end in as brutal a way as we can imagine–or at least get that terrible haircut shaved clean off? What’s so scandalous about the stolen papers?? Will someone ppppllleeeease tell us?!!! And what of the evil she-doctor?? Will she TOO fall prey to a bad, bad death–and might that death come in the form of formaldehyde? And most importantly of all: can there possibly be more nudity to come? I mean, we’ve been spoiled naked rotten already. Does our heroine get to stay chaste and clothed as per most schlock thrillers, or are the filmmakers going to violate even that rule?

Find out more as we continue to the conclusion of:

But speaking of music, I sincerely applaud the musical score by Jeff Sturges! It’s the best part of the movie so far. I am surprised the only other features he scored are “Benji the Hunted” and a reeeaaally obscure Jan-Michael Vincent film from 1998, called “No Rest for the Wicked.”